The Ultimate Pool Group is delighted to announce its plans and an initial tournament schedule for a bumper 2023 season which is set to see total prize money boosted to over £700,000.

The Ultimate Pool Series – featuring the Professional, Challenger and Women’s Series circuits – will return and be bigger than ever with 10 events in each category across five long-weekends throughout the year.

With all stops based at the Grand Hotel in Blackpool, the 2023 Series dates are:

As well as the Series, Ultimate Pool will continue to hold its other established major competitions such the Champions League, the Masters, the Pairs Cup and the Champion of Champions Shootout, with the likelihood of more tournaments to be confirmed.

Its third season, the Ultimate Pool professional circuit will reach its capacity of 80 players in the 2023 campaign. For the first time, at the end of 2023, the bottom 16 players will be relegated to the second-tier Challenger ranks for 2024 – providing the sport with a transparent and fair pyramid structure which is based on results and not reputations or the past.

A big change to the Pro Series will see all ten events each carrying a £10,000 top prize and prize money now going down to the last 32.

The top 16 ranked players (from the end of the 2022 season) will all be seeded into the last 32 of all ten Pro Series events. The remaining 64 professionals will need to come through two preliminary rounds to reach them.

Current professionals and those promoted from the 2022 Challenger Series will all be contacted about entering next season. Please note, there are several ‘wildcard’ spaces available for the 2023 professional ranks – more details about this to be announced.

The sport’s most lucrative circuit for amateur players, the Challenger Series in 2023 will cater for 256 players per event with a £7,000 top prize for each of the ten events.

Following the tenth and final event in November, the top 16 ranked Challengers will be promoted to the 2024 professional ranks.

Any remaining places on the 1st September 2022 will then be open to all 8-ball pool amateurs but offered on a strictly first come, first served basis. New entries will not be acknowledged or accepted before this date. As soon as it is the 1st September, please contact tournament director Neil Toms to enter.

The Ultimate Pool Women’s Series will return for a second edition in 2023.

Each weekend will be able to cater for 84 players with all entrants scheduled to have at least four matches throughout the weekend.

The top prize for each of the Women’s Series events will now be £2,000.

For those that don’t qualify for the knockout rounds, there will once again be five plate events, each carrying a top prize of £400.

Following the fifth and final Women’s Series weekend in November, the top ranked player will earn promotion to the 2024 professional ranks.

Any remaining places on the 1st September 2022 will then be open to all women players but offered on a strictly first come, first served basis. New entries will not be acknowledged or accepted before this date. As soon as it is the 1st September, please contact tournament director Neil Toms to enter.

Please note, the Ultimate Pool Group’s full terms and conditions / conditions of entry documents are soon to be released. All those entering UPG events must abide by these rules. 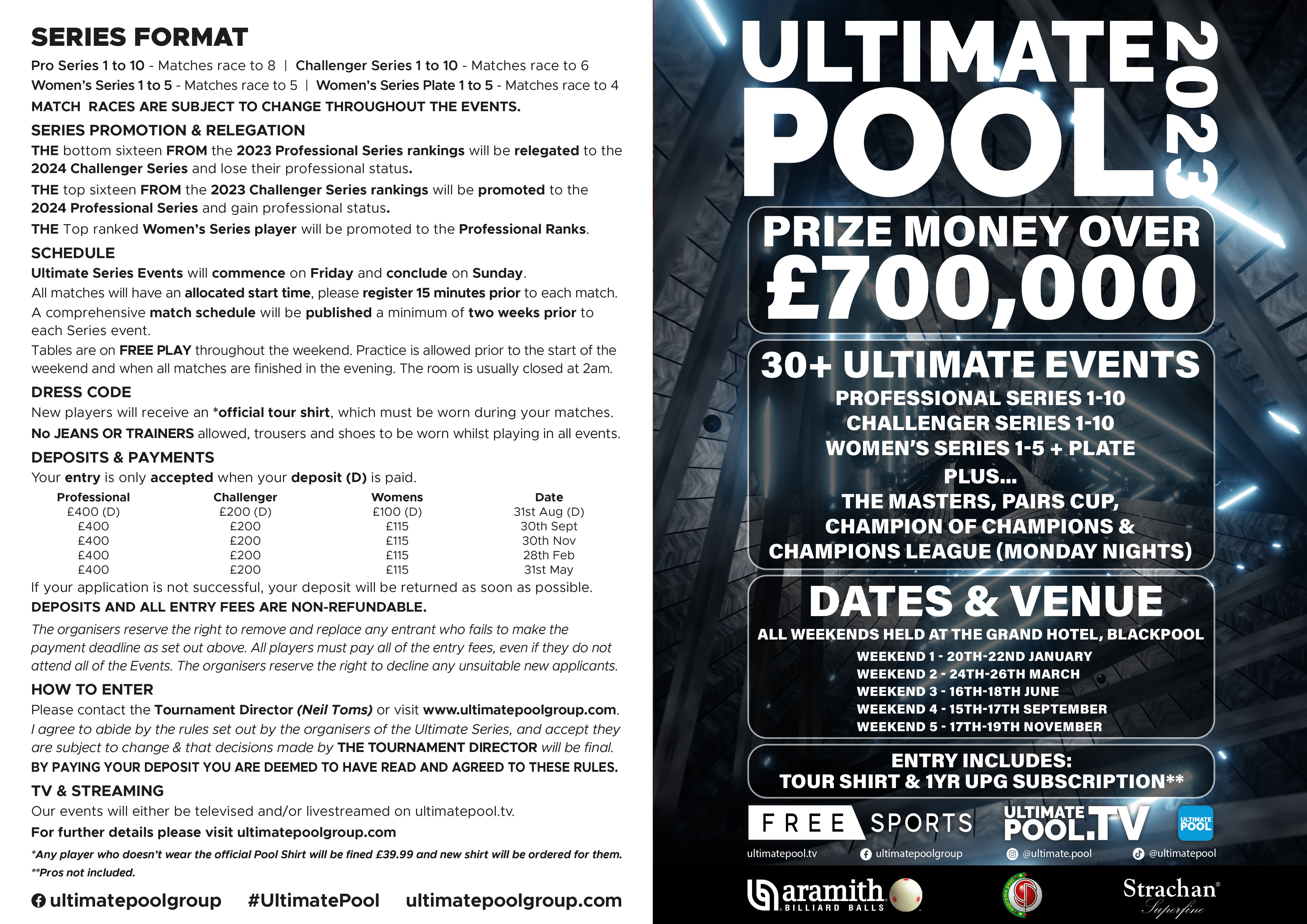 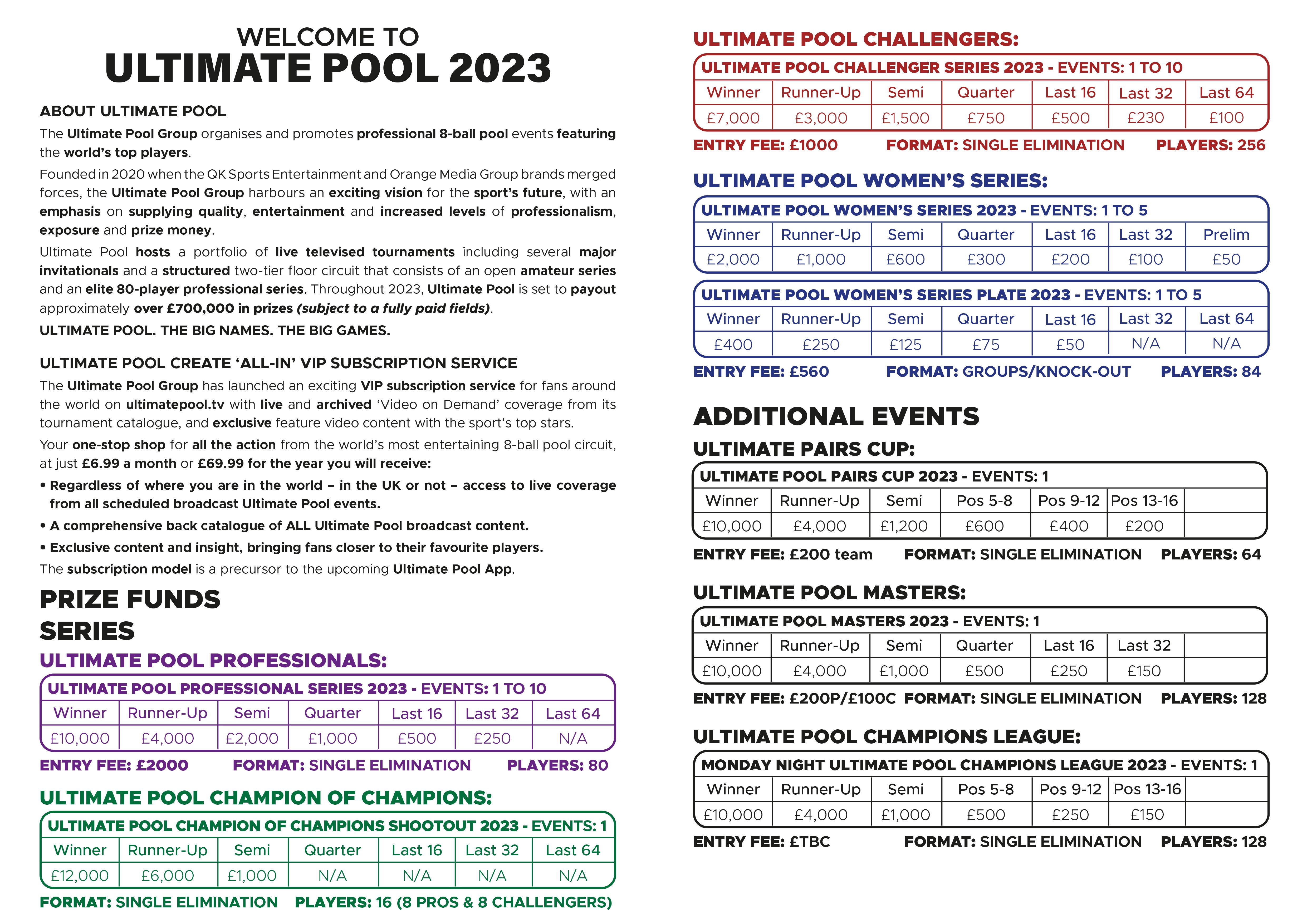