The final Ultimate Pool Professional Series events of this inaugural 2021 season take place between the 3rd-5th December with extensive live coverage on FreeSports TV and ultimatepool.tv.

With the professional circuit set to expand to 48 players for the 2022 campaign, there is added pressure for the existing players next weekend as they scramble to try and secure a top 16 ranking which will put them directly into the first round of all Pro Series events next season.

A place inside the top 16 also means they will be guaranteed to feature in the televised stages of the recently announced Ultimate Pool Professional Cup – the first event of the new 2022 season – which will be broadcast live on BT Sport between Christmas and New Year.

Following the conclusion of Event 8 at the Players Pool & Snooker Lounge in Newcastle-under-Lyme, the rankings will be fixed for a year. All those ranked outside the top 16 will have to play in the preliminary round of all Pro Series events and the Professional Cup. 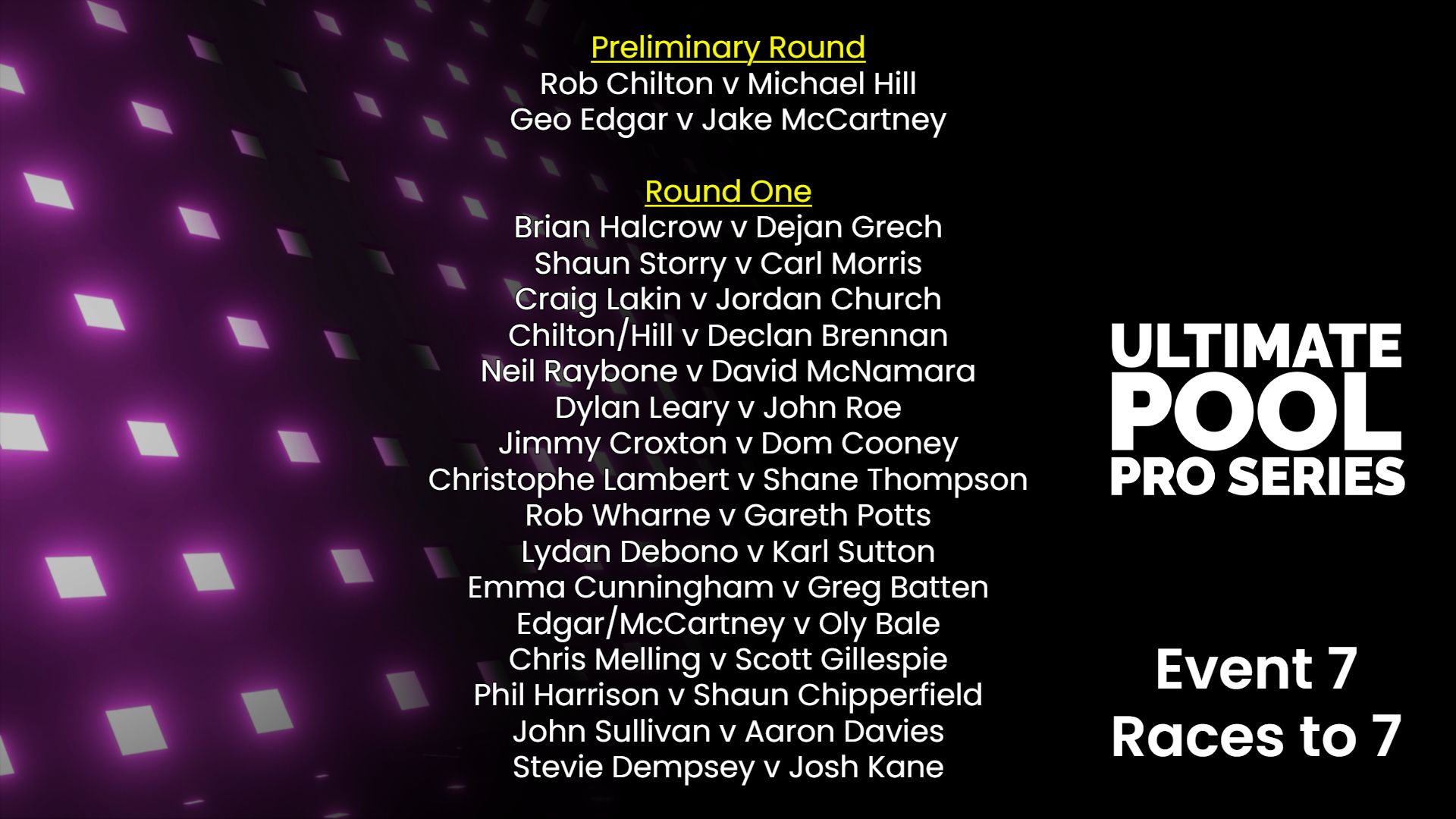 Three-time event winner this season already, Shane Thompson has no such worries about that as he attempts to finish the season as the professional number one ranked player. With a possible total of £14,000 – which is converted to points – on offer to the winner of both events, only four players can mathematically overtake him, although his main rivals in that respect are second-placed Shaun Storry and third-placed Declan Brennan.

Thompson has a very difficult round one assignment against France’s Christophe Lambert in Event 7 – just one of several big matches to look forward to early on in that particular event.

Rob Chilton faces Michael Hill in the preliminary round with the winner to play Brennan in round one later in the day, whilst Craig Lakin and Jordan Church – two players hovering around the 16th place cutoff – will clash in a quick and entertaining affair.

Testament to the calibre and depth of the Ultimate Pool Professional Series, there are two all-world champion ties in round one. Phil Harrison plays Shaun Chipperfield whilst Chris Melling comes up against Scott Gillespie – the latter fixture features two players who were partners only a few weeks ago in the Eative Pairs Cup. The winners of these two games will then meet in the last 16.

Like Gillespie, Gareth Potts currently sits outside of the top 16, although the four-time world champion did miss the opening weekend of the Series in August. ‘The Golden Boy’ will be hoping to work his way into that bracket and his quest starts against fellow local star, Rob Wharne.

Perhaps the most striking first round tie, though, comes towards the top of the drawsheet – a rerun of the Event 5 final from a few weeks ago between the eventual victor Storry and former world champion Carl Morris. 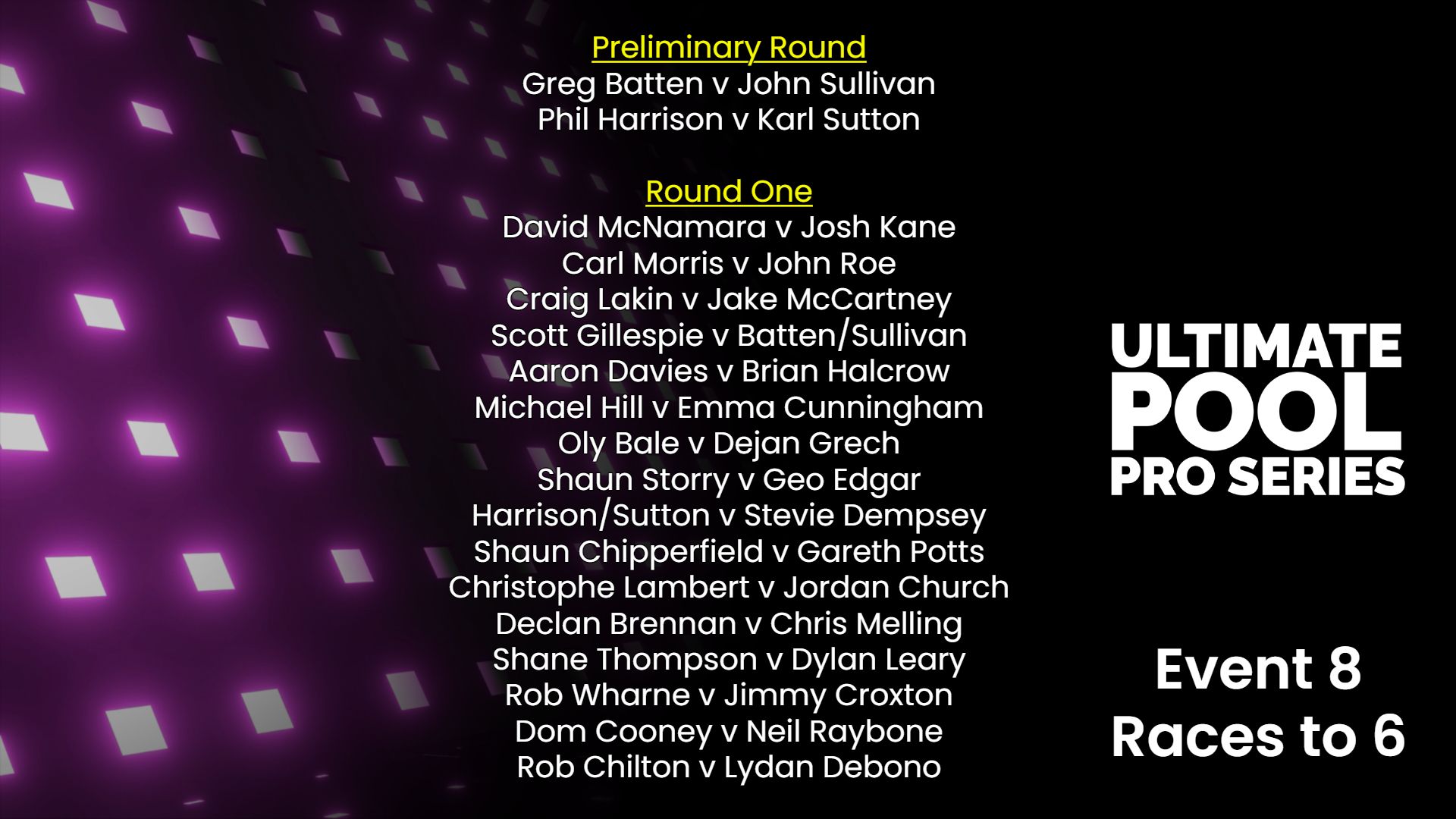 The tension will really be cranked up for the final tournament of the professional session – Event 8.

Thompson meets former European Champion Dylan Leary, whilst the draw churns up yet another dream contest as Brennan once again meets fourth-placed Melling. The two have played twice this season already - Brennan won the Event 1 final but Melling gained some revenge in the last 16 of Event 3.

Emma Cunningham has been competitive in several of her outings so far, but that maiden Series victory has so far eluded her. In a match where the cueists have 10 world titles between them, Cunningham will look to take the scalp of Hill.

As well as crucial ranking positions for next season – remember, at the end of 2022, relegation will also come into play on the Professional Series – these are the final opportunities for players to qualify for the Champion of Champions Shootout that follows the next weekend.

Throughout the weekend, Ultimate Pool’s social media channels will update you on important ranking stories. The current rankings heading into Events 7 & 8 can be found here.

Scores and results can be viewed on CueScore.

A further announcement about television, stream times and match schedules will be released in the coming days.