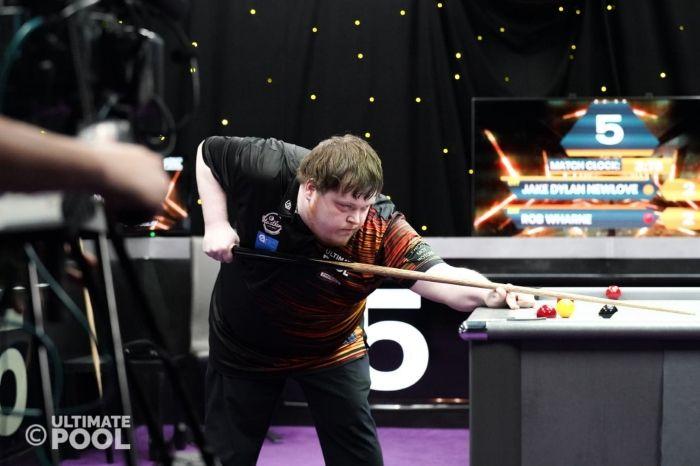 Newlove’s Night at the Masters

Jake-Dylan Newlove enjoyed one of the best nights of his pool career to date as he memorably won Group E of the 2022/23 ultimatepool.tv Masters to qualify for the last 32 of the event.

With the help of a destructive break, the Hull cueist put on a clinical display in Newcastle-under-Lyme, racking up five break clearances and four reverse clearances throughout the evening.

The player of the season so far, three-time Pro Series event winner and reigning six-time world champion Michael Hill was next to feature in the arena. Seen by many as the greatest of all time, Hill faced Newlove in what would be a high-quality and dramatic affair.

Newlove reverse cleared in the first frame before ‘The Machine’ claimed the next three frames which included two reverse clearances of his own. Back came a determined Newlove, though, as he levelled at 3-3, and then 4-4 and 5-5.

Throughout the match, Hill suffered finding a legal ball off his break; it wasn’t until his fifth attempt when he made a successful split – a frame which he produced a break clearance in. It looked like he would still make it through as he chalked up frames 11 and 12 to move to the hill at 7-5 up, but Newlove was not done, as he won frames 13 and 14 to force the tie all the way.

For only the second time in the match, Hill legally potted a ball off his break in the decider, but his break clearance attempt subsequently failed. Newlove stepped up, and kept his cool to clear for surely the biggest single result of his life, so far.

Newlove only had a few minutes to compose himself for the group final, but it didn’t seem to affect him, as he continued to create and make the most of the majority of his chances during an 8-0 success over Bishop inside 30 minutes. The result was the first whitewash of this year’s tournament.