Gillespie Cruises Through to Phase Two

Scott Gillespie lived up to expectations during Week 13 of the ultimatepool.tv Masters as he qualified for the last 32 of the competition.

The reigning World Blackball Champion continued his return to form with two brilliant performances, dropping just two frames throughout the night in Newcastle-under-Lyme – the fewest of any weekly winner, so far.

The Larkhall cueist did miss a routine 8-ball in the first frame of his opening round tie with youngster Harvey Perry, but was not punished, and went on to a record an 8-1 victory that included two break clearances and one reverse clearance.

Next to the baize were Morocco’s Amine Bounif and England’s Josh Gooderham. An entertaining and close tie, Gooderham managed to break free at the end, claiming frames nine and ten to win 6-4 and progress.

However, the weekly final would prove to be a step too far for the 24-year-old as Goobsy registered three reverse clearances and a break clearance in the last frame of another 8-1 success. 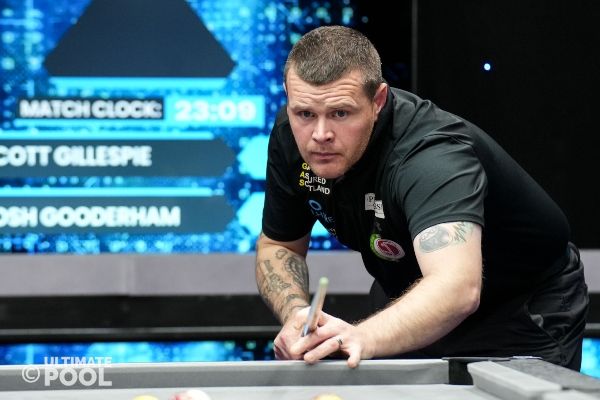