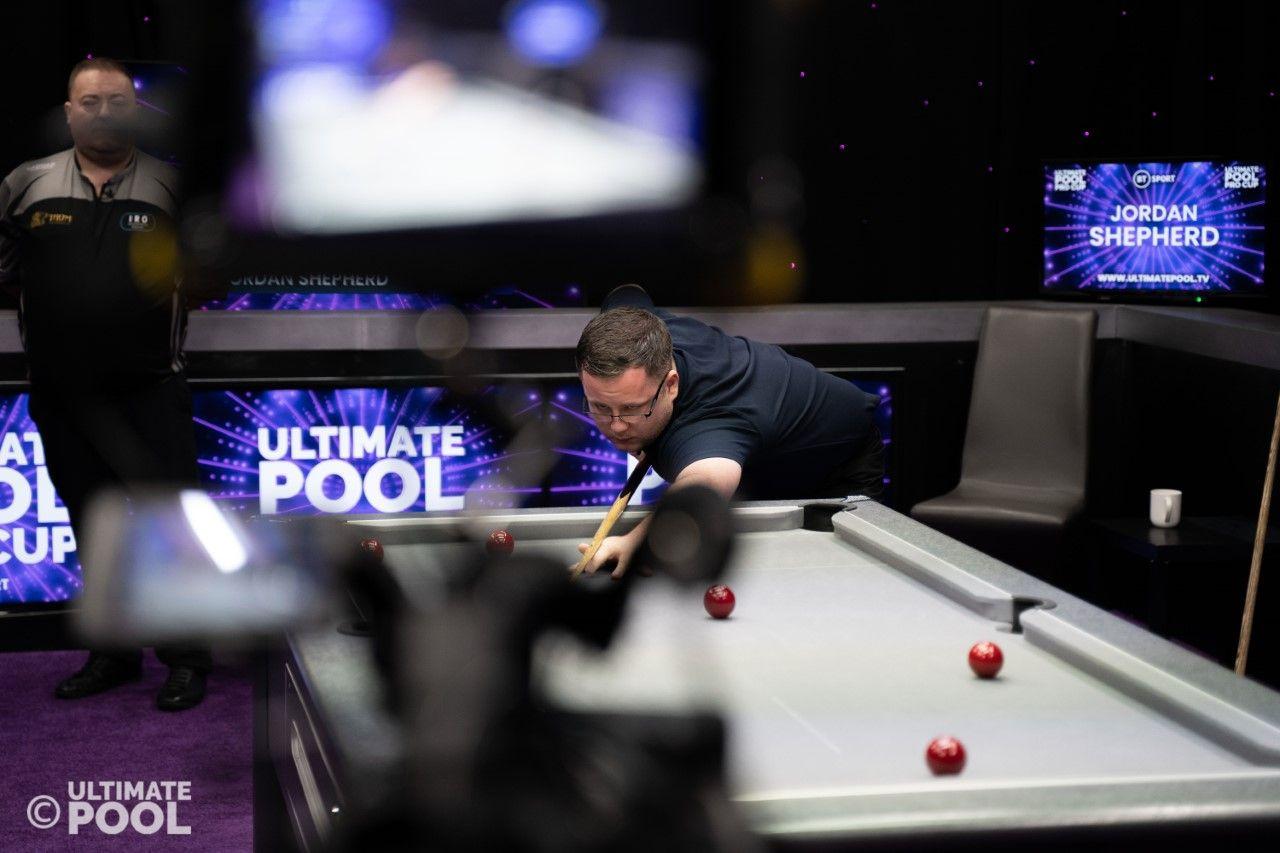 A Memorable Day at the Professional Cup

Just six players remain on course for ultimatepool.tv Professional Cup glory after one of the most memorable days in the sport’s history on Wednesday.

Shepherd appeared on his way out when he trailed Michael Hill 4-0 and 5-1 with time wearing thin in his opening round match before conjuring up a speedy spell to leave the reigning six-time world champion stunned. He rattled in four break clearances and two reverse clearances in taking six out of eight frames, tying up the score at 6-6 before the match-clock expired to force a 6-reds shootout.

A five-time Shootout event winner, Shepherd put Hill in first after winning the lag, and although Hill registered a respectable time of 28.68 seconds, Shepherd bettered it by a couple of seconds to progress.

He then continued his hot streak to deny two-time world champion and two-time Ultimate Pool major event champion last season, Chris Melling, who had earlier ousted David McNamara 6-5 by potting the final 8-ball with only a few seconds left to spare.

The Welsh Wizard cast a spell on The Magician, starting the match with a golden break and then recording two further break clearances and two reverse clearances in a 7-1 victory. Including the golden break, between the two matches Shepherd was on a seven-frame break clearance streak at one point. 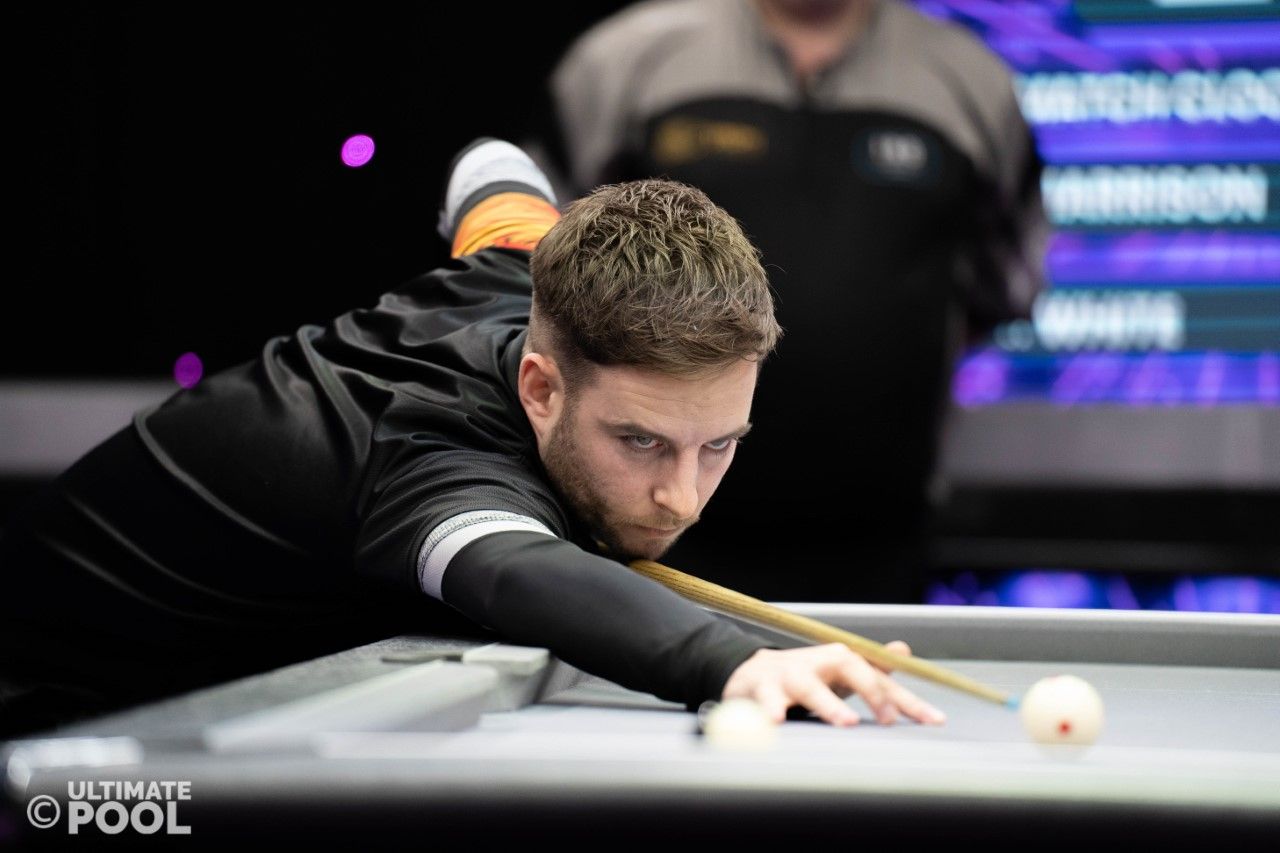 Shepherd’s opponent in the quarter-finals will be new Ultimate Pool professional Liam White who came through Group H.

Promoted from last season’s Challenger Series, local player White led former world champion and current Ultimate Pool Masters champion Phil Harrison 4-0 and 5-1. Harrison, though, threatened to replicate Shepherd’s heroics from earlier by claiming four successive frames to square up at 5-5. However, in yet another grandstand finish, White kept his composure to craft his first break clearance of the match when it mattered most with just seconds to spare to help him win 6-5.

White then got off to another ideal start in his group final against number two seed Shaun Storry who had defeated Luke Gilbert 7-3 in round one. The unseeded player went 4-0 up and would go on to convert for a 7-2 success against his below par opponent who couldn’t bring the amazing form he has shown over the past few months.

With the opening phase of the competition complete, Wednesday’s evening session focused on the first couple of quarter-finals with the event now reverting to an intriguing two-sets format.

Both Tom Cousins and Ronan McCarthy advanced to the semi-finals as they overcame their opponents in straight sets, but in very different ways.

Former back-to-back world champion Cousins compiled spells of perfect pool as he defeated 2012 world champion John Roe – the player he succeeded as world champion – with set scores of 7-2 and 7-1. The Welshman chalked up five break clearances and four reverse clearances to keep his opponent cold.

Many people’s pick to lift the trophy and pocket the £10,000 on Thursday night, Cousins has an aggregate frame record of 28-6 in the tournament so far.

Also on his Ultimate Pool professional debut, Northern Irish legend McCarthy – who has been at the top of the game for over 30 years – continues to impress as he dispatched 2016 world champion Shaun Chipperfield in a very close contest.

A winner of many major titles and a 12-time national champion, McCarthy edged a compelling opening set that ebbed and flowed, making a break clearance in frame 13 to win it 7-6.

The second set was scrappier, but just like the first, McCarthy turned it around from 4-2 down, taking maximum points with a 5-4 set victory and a 2-0 triumph overall. He notched up five break clearances throughout the match.

Thursday's Order of Play from 1100GMT

Coverage is live on BT Sport for viewers in the UK and via a stream on ultimatepool.tv for those outside of the UK.

Please note, the livestream is ONLY available to non-UK viewers.